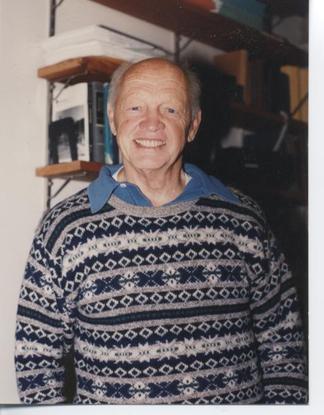 Provenance: Mark Hagemann, Carleton College
Reuse: This item is offered under a Creative Commons Attribution-NonCommercial-ShareAlike license http://creativecommons.org/licenses/by-nc-sa/3.0/ You may reuse this item for non-commercial purposes as long as you provide attribution and offer any derivative works under a similar license.
Citationist: Scott Linneman

The Robert Christman Distinguished Service Award was established by NAGT in 2008 to recognize individuals who have provided long, distinguished service to the Association at the national and/or section level. This year's recipient of the Robert Christman Distinguished Service Award exemplifies, amazingly well, the principles spelled out in the official award description. Today I am honored, humbled and cautious about describing Bob Christman's career of service. Honored because I count Bob and Bess among my friends and surrogate grandparents to my kids. Humbled by the prolific nature of his career as a geoscience educator. And cautious because I don't want you to hesitate nominating a deserving NAGT member because he or she may have served well, but "isn't a Christman".

When I joined NAGT (the first time) as a graduate teaching assistant, I sent my $15 to the NAGT office in Bellingham. My JGE's came from Bellingham. I reasoned that there must be a sizable association presence in the city of subdued excitement. Years later, when I interviewed to join the WWU faculty, I discovered that the "sizable presence" was an emeritus desk, some space in the basement and a tireless guy who wore shorts all year.

Because this award is about service to the association, I won't dwell on Bob's non-NAGT achievements (2 degrees from Michigan; Princeton PhD; 4 years at USGS; 5 years at Cornell; 34 years at WWU during which he ran externally-funded teacher workshops every summer from 1961 to 1995; former president of the Washington Science Teachers Association and editor of its journal for 25 years). Rather, I would like to highlight his NAGT career: Bob served as President of the Pacific Northwest section in 1974 and 1975 and has served as the section's Secretary/Treasurer since 1976, including during its resurrection in the last 10 years. He was also an associate editor of the Journal of Geoscience Education from 1979 until 1987, contributing dozens of film reviews and writing a column for secondary school teachers. Bob has served the national executive committee as a Councilor-at-Large [1982-84], Secretary/Treasurer [1989-91], and Executive Director [1991-2005]. It was this last post that has most challenged the association to figure out how to replace all that this man did in his spare time (did I mention that he also volunteers for his church, grows a huge garden and makes 50 gallons of wine every year?).

All volunteer organizations exist because of the hard work of their members. But some serve in a truly distinguished way. I suspect you know a few such people and I ask you to consider making a future nomination. But today I ask you to please join me in honoring theinaugural recipient of the Robert Christman Distinguished Service Award: Bob Christman.