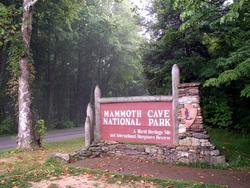 The Geoscience Teachers in Parks (GTIP) program is a collaborative effort between NAGT and the National Park Service to provide professional development for K12 teachers of geoscience. Elementary, middle school, and high school teachers of geoscience, as well as recent graduates who are prospective geoscience teachers are eligible to take part in this program.

Since 1996, geoscientists have been invited as interns to national parks across the United States as part of Geoscientists-in-the-Parks (GIP) , a program which grants interns the opportunity to collaborate with park staff and conduct in situ research on various aspects of the park to create summaries, inventories and surveys for park staff, and field guides and interpretive talks for park visitors.

Now, parks are inviting teachers as well. In 2006, NAGT (National Association of Geoscience Teachers) expanded upon this program by providing funds to get teachers in Mammoth Cave National Park to learn from and collaborate with park personnel, local university staff, contracted researchers, and park partners. When possible, each "Geoscience-teacher-in-the-park" will be paired with a "Geoscientist-in-the-park." Interns gain experience in field, lab, and classroom. Because this is a relatively recent creation, the program continues to develop.

"This truly brings into perspective what I teach in the classroom about scientific method and how it is used in the various fields of science careers right here in our local area... Being able to converse and interact with researchers and employees left me with a sense of their pride and dedication to the environment and field in which they work." - Debbie Sherfey ('08)
Upon completion of 200 hours of work (at or by mid-July) and submission of a written report, interns receive $1,500 in stipend. Work is in various areas as are the end results produced. Teachers may strengthen their professional networks and enlarge their selection of resources available with which to teach their students. Those interested in furthering their education are provided with up to $500 (in addition to the stipend) to enroll in a college courses, conferences, etc. Interns work with the Mammoth Cave International Center for Science and Learning (MCICSL) and Mammoth Cave Environmental Education staff to assist with on-going park research and educational endeavors. In addition, interns also conduct public presentations that emphasize park resources and the variety of Geoscience jobs/careers that are available. They also become a valuable resource to park personnel for advice and assistance on matters related to their projects after the completion of the internship. Projects that former interns have contributed to include:

Show Past Interns and Reports

Teachers may apply to be a part of the Geoscience Teachers in the Park program by completing the online application.

The objective of Geoscience-Teachers-in-the-Parks Internship is to provide teachers with new avenues of teaching. The program has inspired several ongoing activities: