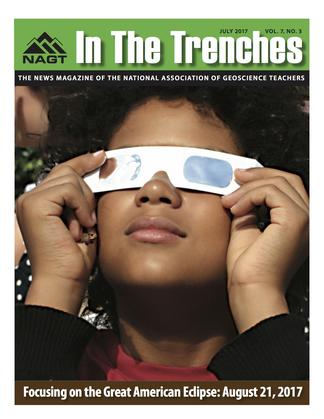 Hide
Millions of eyes in the United States will be looking upward on August 21. This issue shares information on how to safely view the solar eclipse that day — and some ideas for lessons both during and after the eclipse. [Image by Vbloke, made available under Attribution-NonCommercial-NoDerivs 2.0 Generic license (CC BY-NC-ND 2.0)] 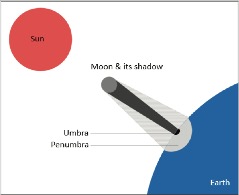 A total solar eclipse is one of the most beautiful cosmic phenomena that we can see with our own eyes. Although a total eclipse happens somewhere in the world about every eighteen months, it is rare for one to happen close to home. So, mark your calendars! On August 21, 2017, the Moon will cast its shadow across the contiguous United States. Weather permitting, people along the path of the shadow will have the opportunity to see a partial eclipse of the Sun, and those who find themselves anywhere in the darkest part of the Moon's shadow will also have the opportunity to witness a total eclipse of the Sun. Read more... 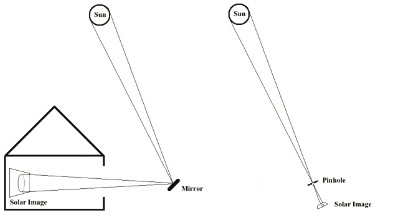 Childhood memories are the only experience the majority of teachers today have observing solar eclipses. Often those memories involve classic pinhole imaging: using a piece of cardboard with a small pinhole to project a solar image onto a second cardboard screen. The system is simple, requiring few materials, but it has several limitations. Holding the pinhole in one hand and a screen in the other produces an image smaller than a penny. Larger images, better for group viewing and data collection, require the frustrating effort of increasing the pinhole-screen distance while keeping everything steady and aligned. A solar image 10 cm in diameter requires a pinhole to screen distance of over 10 meters! A long-known but little-used variation on pinhole projection offers a simple way to create large solar images perfect for classroom viewing and experimentation.Read more... 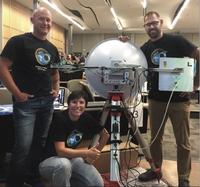 The last time the United States experienced a total solar eclipse in a coast-to-coast path was 1918. The tow-truck and light switch were just two-years old; the torque wrench and grocery bag were only recently invented; and the blender, pop-up toaster and adhesive bandage were still to come. And although weather balloons already existed (they were first launched in 1896), it was difficult to track them without the radio transmissions that didn't come along until the 1930s. Since the Great American Eclipse of 2017 will create such a wide path of totality across land, from Oregon to South Carolina, we will have the opportunity for ninety minutes of continuous data and image collection through experiments and activities from research institutions and citizen science projects, such as the Eclipse Ballooning Project. Read more...

Solar eclipses are notable for a variety of scientific and social reasons. By blocking the intense sunlight that we normally see, they provide astronomers with information from the much dimmer outer layers of the Sun's atmosphere, the chromosphere and corona. They also enable scientists to see stars when they are almost directly behind the Sun and therefore are normally invisible to us. This was important in 1919 when Arthur Eddington photographed a total solar eclipse and imaged stars whose light paths had been affected by the Sun, thereby providing the first confirmation of Einstein's theory of general relativity. Read more...

ONLINE EXTRA: Don't Be Afraid of the Dark

ONLINE EXTRA: Community Preparations at the Point of Greatest Eclipse

On August 21, 2017, Hopkinsville, Kentucky, will play host to a massive astronomical event — a total solar eclipse — and the planning details are unprecedented.Read more...

This collection from the On the Cutting Edge module on Teaching with Visualizations showcases animations showing the phases of the moon, solar system formation, eclipses, and distance.

Teaching Activity: Phases of the Moon »

This teaching activity from the Starting Point: Teaching Introductory Geoscience website has students use a simple physical model of the Earth, sun, and moon to understand why the moon changes phases from the perspective of Earthly observers.