Perspectives on Science and Religion 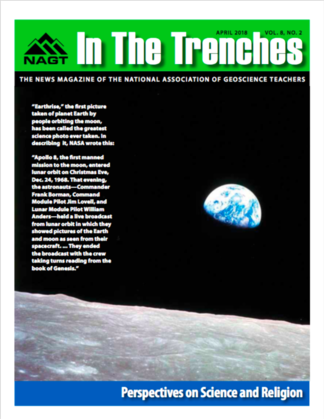 Hide
As NASA's account of this pivotal moment in Earth history illustrates, science and religion have long been inter- woven in Western culture. In this issue we explore what geoscience educators need to be aware of and ways they can respond when teaching students with views that may be contrary to science. ["Earthrise" Photo by Wil- liam Anders, NASA
Online Supplements

"If religion can no longer dictate the nature of factual conclusions properly under the magisterium of science, then scientists cannot claim higher insight into moral truth from any superior knowledge of the world's empirical constitution. This mutual humility has important practical consequences in a world of such diverse passions..." —Paleontologist Stephen Jay Gould on "Nonoverlapping Magesteria," available online here.

Letter from the Editor: Perspectives on Science and Religion

As science educators, we know our best classroom strategies recognize that students come from diverse backgrounds and may bring multiple perspectives and deeply held beliefs to the classroom. We invite these students into our respective science disciplines by helping them develop critical thinking skills, data collection and analysis skills, and an understanding of the scientific method. All through this process, we understand that attacking our students' belief systems may only serve to entrench them more deeply in their misconceptions about science. Unfortunately, one topic in the classroom that is often avoided is a discussion of religion and science. Read more...

As geoscience educators, we dedicate our professional lives to sharing knowledge about Earth and its history with our students. Yet, we may find ourselves on the battlefield of a culture war over the perceived conflict between science and religion. A 2009 Pew survey found that 59% of the American public believe that science and religion are often in conflict (Masci, 2009). The most acute tension is felt and expressed among Evangelical Protestant Christians (some 25% of the American public), many of whom believe that modern scientific explanations of cosmic origins, Earth history, and evolution are incompatible with the Genesis account of the creation week and the flood of Noah. Young Earth Creationism (YEC) and "flood geology" is promoted to this community as the "Christian alternative" to godless, secular science. Many of our students bring those concerns into the geology classroom. Read more...

×
Teaching About Evolution in a Creationist Environment

I remember quite clearly one Sunday morning when the pastor of the church I was attending said, "You cannot be a Christian, and have any integrity, if you believe in evolution." For me, this was the starting point of a decades-long exploration of the perceived conflicts between science and religion, particularly regarding evolution. Today, I teach biology at a conservative Christian university in the Southwest. My primary teaching assignment is the non-science majors' biology course. This class includes a survey of the human body as well as genetics, biotechnology, ecology, and evolution. I have taught this class for over five years now and have found it to be well received, despite my impression that many students approach it with a strong reticence towards some aspects of the course, particularly evolutionary theory. Read more...

Most Earth science teachers are aware that young earth creationism (YEC) claims that Earth is less than 10,000 years old and that most of the geological record can be ascribed to Noah's Flood. However, many may not be aware of two Kentucky tourism sites that are devoted to promoting YEC. These YEC tourist sites are: the Creation Museum (near Hebron) and the Ark Encounter (in Williamstown). Both of these attractions are run by Answers in Genesis (AiG), a ministry devoted to promoting YEC and a rather militant biblical literalism. Millions of people have visited these attractions. Other creationist museums exist, but most are rather small and poorly funded in contrast to the Creation Museum which cost at least $27 million to construct and the Ark Encounter which may have cost more than $100 million. Read more...

In my position as a religion teacher at an independent high school in the greater D.C. area, I am graced with the privilege of walking my students through a critical study of the Bible, including the creation stories in Genesis. I have a fairly diverse student body—though I teach at an Episcopal school, my students come from Catholic, Methodist, Presbyterian, Baptist, Hindu, Muslim, Atheist, Agnostic, Jewish, and non-religious backgrounds. Some are devout, others less so. Some are firm in their theological convictions, others not-so-much. Yet, by the grace of God, they are all curious. Their curiosity is my greatest aid in teaching and discussing relationships between fields of knowledge, including the sometimes contentious relationship between empirical and non-empirical ways of knowing. Read more...

×
ONLINE EXTRA: Perspective: A selection from "The Teacher-Friendly Guide to Climate Change"

Don Duggan-Haas, Paleontological Research Institution and Museum of the Earth

In polarizing issues, apocalyptic rhetoric is often found at both poles of the issue in question. The extremes related to climate change are destruction of the environment and civilization (or even the entire Earth) at one extreme and destruction of the economy, freedom, and the "American way of life" at the other. We've been telling stories of apocalypse and of lost Edens as long as we've been telling stories. Such tales are engaging, memorable, instructive, and motivating. Environmental educators and advocates have been telling modern versions of these tales for generations for the same reasons that other folks have told them for millennia. From the Book of Genesis to The Lorax, humans are drawn to stories of paradise lost. And they learn from them too. Read more...

Additional resources to explore related to the topic of Perspectives on Science and Religion as relevant to teaching geoscience Read more...

Ideas, discussion points, and activities to help students discover for themselves that viewing the world through naturalistic glasses can be useful, even if they don't think that's the only useful perspective.

Evolution is a fundamental theory of modern geosciences and life sciences, yet it is one of the most controversial issues within science education. The origins of the controversy have both historical and philosophical roots. In this teaching activity, students examine dominant and alternative perspectives on what science is, what religion is, and the existence and location of boundaries between these disciplines.

In this paper assignment, developed by Katherine Bulinski of Bellarmine University, students critically evaluate one aspect of the Evolution vs. Creationism debate.

Teaching Activity: Scientific Debate and the Nature of Certainty»

In this teaching activity, part of the collection of InTeGrate Teaching Materials, students learn about the nature of scientific knowledge. Before class, students read a popular science account of a 'controversy' in climate science. In class, the instructor describes the process of peer-review and scientific debate, and leads a conversation about how this is similar to and different from other kinds of knowledge. This may lead into further discussion of climate impacts and climate projections, but that is not included here. Students had an option to write their final paper about climate change and scientific knowledge.