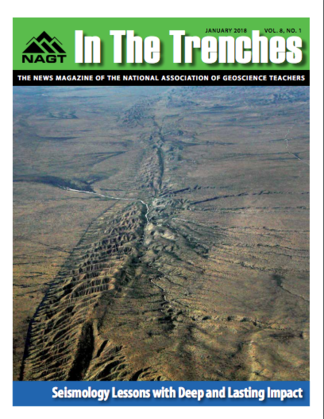 Hide
The off set of streams along the San Andreas fault shows that movement has occurred over time. Does movement such as this occur all at once? How do rocks along a fault respond to stress before and after an earthquake? In this issue, the authors present methods for eff ectively teaching earthquake science. [Photo, taken at the Carrizo Plain National Park, by Doc Searls, AttributionShareAlike 2.0 Generic (CC BY-SA 2.0)] [Photo by Earth & Environmental Systems Institute, Penn State University]
Online Supplements 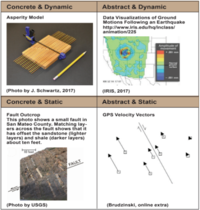 Provenance: Lara Palmquist, Carleton College
Reuse: This item is offered under a Creative Commons Attribution-NonCommercial-ShareAlike license http://creativecommons.org/licenses/by-nc-sa/3.0/ You may reuse this item for non-commercial purposes as long as you provide attribution and offer any derivative works under a similar license.
Using Models to Develop Deep Understandings of Earthquakes

Earthquakes are a popular topic with both students and teachers. Their unpredictable nature and potentially catastrophic effects command attention and pique curiosity. As instructors, it is common for us to take advantage of earthquakes as seismological "teachable moments." However, we are also responsible for developing our students' fundamental understanding of "how" and "why" earthquakes occur and how they fit within the larger Earth system. Read more... 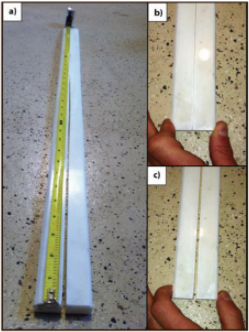 Provenance: Lara Palmquist, Carleton College
Reuse: This item is offered under a Creative Commons Attribution-NonCommercial-ShareAlike license http://creativecommons.org/licenses/by-nc-sa/3.0/ You may reuse this item for non-commercial purposes as long as you provide attribution and offer any derivative works under a similar license.
Bending Rocks in the Classroom

How a rock responds to stress is a concept critical to forming explanatory models in the geosciences. While your students are likely to have had lots of experience with rocks, few will have experienced them behaving elastically. As a result, most will think of rocks as rigid solids (Hubenthal, 2015), something which impedes learning of concepts such as the elastic rebound theory. It is possible to bend rocks and minerals in class to demonstrate their elastic property (e.g., returning to their original shape and size after the forces deforming them have been removed). Read more... 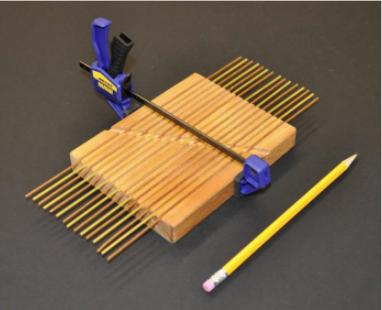 Provenance: Lara Palmquist, Carleton College
Reuse: This item is offered under a Creative Commons Attribution-NonCommercial-ShareAlike license http://creativecommons.org/licenses/by-nc-sa/3.0/ You may reuse this item for non-commercial purposes as long as you provide attribution and offer any derivative works under a similar license.
Teaching Fault Asperities with Spaghetti

Rocks deform, or change shape, as a result of stress. In one geologic setting, like a fault, rocks can experience multiple types of deformation. A fault exists where there are large fractures in geologic bedrock along which there has been movement in the past. This is evidence that the rock has experienced brittle deformation. As stress builds up around a fault the rocks will bend on either side of the fault. When the stress gets great enough, the rocks will slip (or move) relative to one another, releasing stress and returning the rocks to their original pre-bent shape. The geologic event that occurs when the rocks move is called an earthquake. Read more... 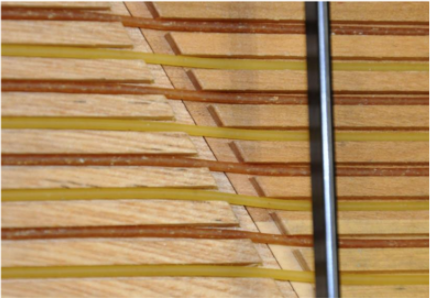 Use a 1/8" round over bit in table router to round over the top sides, ends and the vertical corners of the wood block. On the table saw set the saw depth to 1/8" and the fence to 0.5". With the rounded over top of the block facing down and the side against the fence, cut a groove through the block. Move the fence in increments of 1/4", cutting a groove each time, until you have 15 grooves and you should have about 0.5" left on the block. Read more...

Provenance: Lara Palmquist, Carleton College
Reuse: This item is offered under a Creative Commons Attribution-NonCommercial-ShareAlike license http://creativecommons.org/licenses/by-nc-sa/3.0/ You may reuse this item for non-commercial purposes as long as you provide attribution and offer any derivative works under a similar license.
Modeling the Role of Elasticity in Earthquakes

Understanding what an earthquake is and how one happens is not a straightforward task for novice geoscience learners (Francek, 2013). Understanding the mechanism (elastic rebound) and its unpredictability, in both time and magnitude, can be very challenging. To (safely) afford students an earthquake experience, a model like the earthquake machine (Hubenthal, Braile, & Taber, 2008) can be instructive. This article describes how to build your own earthquake machine and provides ideas for the types of inquiry that you can conduct as you implement such a model in class. Read more...

ONLINE EXTRA: Learners and Learning as a Foundation for Competent Earthquake Instruction

In spite of being societally relevant and engaging to learners, earthquakes can be a challenging topic to comprehend as the underlying physical processes cannot be directly observed. Research shows that students have difficulty learning content that occurs outside the range of everyday human activity (i.e. large timescales, extremely small or large spatial scale) (Jones et al., 2009; Tretter et al., 2006). For instance, elastic rebound theory explains accumulation and release of earthquake energy (see Dolphin in this issue). In this process, large sections (i.e.100s of square kilometers) of Earth's rigid outer layer (i.e. the lithosphere) slowly deform, on timescales ranging from 10s to 100s, or even 1000s of years. Read more...

×
ONLINE EXTRA: The History of Elastic Rebound Theory: How a Big Disaster Helped Us Better Understand How the Earth Works

By the early 1900s, a full 25% of the US population located west of the Rocky Mountains lived in and around San Francisco. There were 17 cable car lines, 37 banks, and three opera houses. The city rivaled New York for imports and exports and became known as The Jewel of the West, and Paris of the Pacific. During the early morning hours of the 18th of April in 1906, the earth began to shake violently in what was later classified as a magnitude 7.8 earthquake.
Read more...

Provenance: Lara Palmquist, Carleton College
Reuse: This item is offered under a Creative Commons Attribution-NonCommercial-ShareAlike license http://creativecommons.org/licenses/by-nc-sa/3.0/ You may reuse this item for non-commercial purposes as long as you provide attribution and offer any derivative works under a similar license.
ONLINE EXTRA: Using GPS Velocity Vectors to Illustrate Elastic Rebound

Many of the different models for elastic rebound described in this issue are driven by the difficulty in creating a visualization of the actual process that operates on faults. Rocks near a fault are bent on the order of a few meters relative to rocks far from the fault, but this bending can occur over tens of kilometers of distance. The gradual bending near active faults can build up over tens to hundreds of years, but when an earthquake occurs, the rocks move in matter of seconds. Students typically see only the results of an earthquake, such as the offset of a fence built across a fault, but not the gradual motion that precedes an earthquake. Read more... 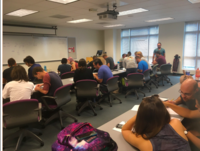 Have you ever tried presenting graphs to your students only to experience frustration when they look first to the data points, ignoring important information on the graphical axes? Does this frustration lead to a less quantitative presentation of your course—do you leave the graphs (or the math behind them) out entirely? Geoscience courses are often viewed as being qualitative, despite the fact that modern geoscientists practice in a thoroughly quantitative field. Enhancing our students' skills and experience in quantitative reasoning in undergraduate geology courses can be difficult, but it is essential if students are to work successfully in the profession after graduation. Read more...

This site guide provides access to earthquake-related teaching materials such as teaching activities, visualizations, tools, and datasets. Explore our collections of materials for teaching about earthquakes using data, simulations, and models, teaching geophysics, and teaching about hazards in introductory courses.

This teaching activity, part of the On The Cutting Edge peer reviewed teaching activities collection, invites students to students examine seismic waveforms recorded during the M5.1 La Habra earthquake and place their observations in the tectonic framework of southern California. The students will make basic observations regarding the location of the earthquake based on seismic waveforms collected by the Southern California Seismic Network (SCSN), and compare the waveforms with those collected by a low-cost sensor installed in a nearby school through the Quake-Catcher Network (QCN). The QCN is a citizen-science program, where schools, offices, and homes adopt a sensor, and learn about earthquake science. Students will evaluate the performance of these sensors compared with more costly SCSN sensors, and whether the use of these sensors can provide an effective tool in the promotion of earthquake science education on risk and resilience. To conclude the activity, students will communicate their findings in a 'think, pair, share' activity, and discuss the potential seismic risk and economic impact in the region with a classmate.

In this teaching activity, developed by Eric Baer and Carla Whittington of Highline College, students look at their seismic hazard and then determine the likelihood that their residence will be uninhabitable after 500-year return interval quake. The student goals of the activity include learning what seismic hazard is, learning to relate shaking to intensity, and learning about the relationship between intensity and damage to structures.

In this teaching activity, part of the On the Cutting Edge Exemplary Teaching Collection, students analyze earthquake seismicity from the North Anatolian fault using a variety of methods. Students have the opportunity to make and interpret an earthquake focal mechanism from scratch, and the additional portions of the lab provide regional context and historical data to develop a better understanding of seismicity in Turkey.